I’ve never done this before, but since I’ve got most of a week left in my vacation from my day job (I just took some time off to de-stress at home) I thought hey, my To Do list is swiftly getting whittled down. I have the time. It’s a good time of year. Why not get brave and offer some art for sale?

So I’m thinking I’ll do just that! Let’s see how this goes.

I’m not the sort of artist who’s mastered doing commissions and staying sane, yet – I’ve tried a few times and I rapidly turn into a nervous wreck who can’t even draw stick figures when I realize that another human being might be depending on me for something – but I’ve come up with an alternative that still lets me offer you guys something. With any luck, this might build my confidence a bit, too.

The plan, so far, is to do up a few 8″x10″ watercolor pieces featuring one or two of the characters from Prophecy of the Circle. Since they’re quickies (kind of like an extra super big comic panel; only a couple of hours worth of work each) I’m setting them at $30 USD a piece, with $7 shipping on top of that, and they’ll be first come, first served, for one of a kind original pieces. I’m thinking I can get between 3 and 5 done by the weekend, and I’ll keep making more in my spare time as time allows. I get crazy nervous about making things that people would pay actual money for and shipping them out into the wider world, but ’tis the season, so…. I’ll give this a shot. 🙂 If you ever wanted to own something I made a pretty artistic mess on (or better yet, gift it to a fellow fan!), now’s your chance.

My goal is to post the first couple of these on Saturday. I’ll have more news closer to then (gotta make a few of these things, after all!), so keep an eye on this spot.

If you’re interested in the possibility of a specific character, let me know in the comments. =P No guarantees, especially for the first test batch, but it’ll help me figure out how to prioritize who I draw.

Update: I’ll be going through Storenvy to sell these, and so accepted payments’ll be through Paypal. 🙂 I’ve done some sorting and shipping prices are set at $5 within Canada, $7 for the states and $10 for everywhere else. 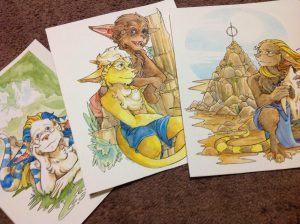