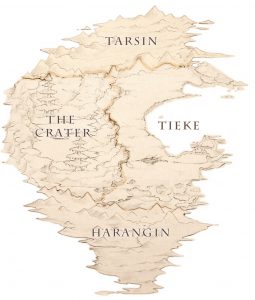 The Prophecy of the Circle takes place on a single continent in the southwestern hemisphere of a distant and unnamed world. Two sentient species, the tikedi and their predatory reptilian neighbors, the tekk, live in a violent co-existence with one another. There is no common language between them, and no interest in the exchange of ideas. There are only borders that must never be crossed, rules that must never be ignored, and the Circle, which must never be broken.

Jahrd Ardeana, a young mixed-blood tikedi from the Tarsin desert, is driven by childhood tragedy to seek answers to forbidden questions. Against his peoples’ wishes, he devotes his life to mastering the language of the tekk in hopes of finding the reason why some of his people must die at their hands while others are spared.

In distant Tieke City, once called a marvel of the tikedi world, a sickness devastates the population. The Crater, homeland of the tekk, holds the key to driving it back for good, but the quest for the cure comes at the risk of war both from within and from without.

The world over, among the tekk and tikedi alike, dissent stirs. Ancient ways and warnings are questioned and dismissed, and the balance between the races begins to shift. The Circle is breaking.

This webcomic was originally envisioned as a prequel to a much larger tale. The story began its existence as a standalone trilogy of novels until the author realized that the beginning she’d written wasn’t really the beginning at all, and a whole other novel’s worth of material existed as backstory. Rather than adding an awkward fourth novel, she decided to try her hand at churning out a zillion pages of comic to give everyone something free and fun. It’s uncertain if the story will continue as novels when the comic winds down, as originally planned, or if the comics will simply run until the story is completely finished. Time will tell.

Currently the story is updated twice weekly. Every Monday and Thursday something new appears, and if a comic’s missed it causes the author/artist/madwoman behind the curtain to have a fit and so there’s usually art to at least fill the gap lest she feel really, really bad.

For the curious, the art is completely traditional: pencil, ink, and then watercolour.