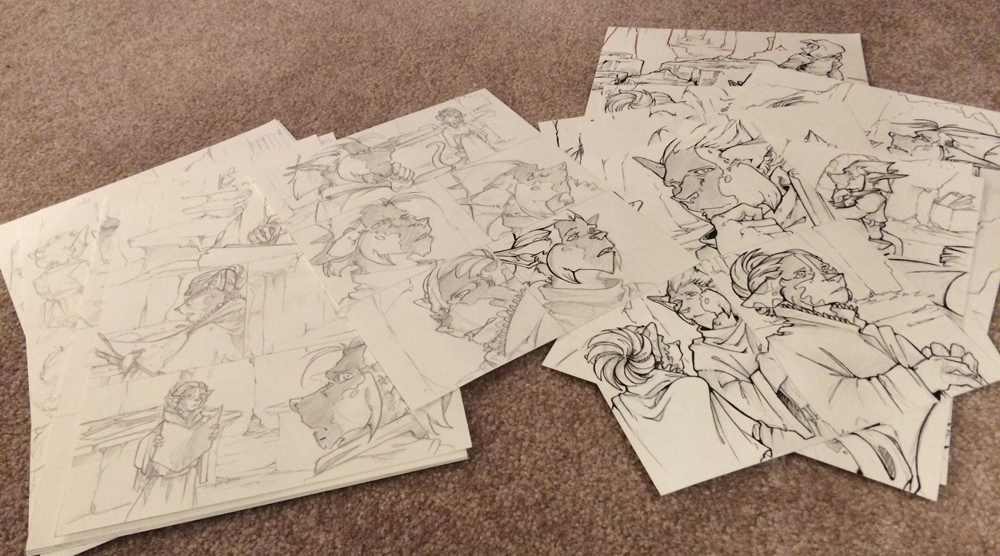 Time for the weekly progress report! Just a small one, even though I’ve been working a ton on this. Pages are at about halfway inked right now. I’ve got eleven-and-a-little-bit done out of twenty, so that’s the completed pile on the right and the batch of still-to-do comics on the left. Inking apparently takes me longer than pencilling these days, which is backwards to what I’m used to. Then again, I’m being more careful than I used to be. Also, Tim spotted an oops where a character switched hands between two panels and I had to drop inking and switch back to pencilling to fix it up and that slowed me down a wee bit; still, I’m glad he caught that at an early stage! This is why I should make him look over my stuff more often than I typically do.


I’m hoping to get the inks finished this week, and then I can launch into finishing the pages. That’s going to be a sweet feeling.  I’ll definitely be done by March 5th, but man am I glad I pushed things back from February 5th. I would not have made it by then. No way.

In not-quite-comic-related-news, I mentioned last time that I was going to launch back into sketching, and I have! I’ll get the first of those posted tomorrow, starting with the first of last month’s Request-a-Sketch results. 😉 I’ve got two out of three done and they were loads of fun and I really enjoyed how they turned out. It’s definitely worth it to make myself doodle before I do serious comic work.