Well. Only a little bit, and I might have helped it along a bit with my poor life choices. Basically I got the flu and wisely stayed in bed for two days, then not so wisely decided to go to work on day three and somehow managed to just…. fall straight down a hill on the way to work. I don’t know. I looked down for two seconds and then I was somehow abruptly on my back in the grass flailing like a flipped turtle with a bloodied knee, bashed up elbow, and an ankle so sprained that it was making some wicked popping noises. It’s much quieter now and functions the way a foot should again, but for a while there it was a noodle attached to the bottom of my leg instead.

I went to work anyway because I feel bad that I’d missed two days. In hindsight, I’m not necessarily very good in the self-preservation department and I respond shockingly well to even the hint of guilt for someone who wasn’t raised Catholic. Not a great combo.

Further along in the month there was a bit more similar foolishness. Tim and I decided a while back that we were going to go to Kupocon. I, unwisely, decided I was going to get anything I had on my To Do list completely cleared before we went and put myself into workaholic overdrive mode before the big travelling day.

Then the condo was invaded by ants a few days before we were due to leave, I had to go to war with them and beat them back with vinegar, an awful lot of heavy duty cleaning, and a shop vac briefly stolen from down the hall, didn’t accomplish my goal, and worked myself into a tizzy.

Again, I will never claim genius. I don’t possess such a thing. I’m insane at best.

So it stands to reason that maybe I wasn’t mentally in the best shape when the day of travelling to Vancouver arrived. I really should have expected some kind of revenge from the meatsack that I walk around in. Annnnd so I kind of passed out on the bus-ride to the ferry for what seemed, at the time, to be for no discernable reason. Seriously. I mean literally passed out: I was fine, I was watching the scenery go by, all was well, and then I abruptly felt extremely unwell. It turns out that in times of dire physical distress I’m a little bit of a robot who pretty much just looks astounded and spews error messages in a ridiculously calm tone. I pretty much turned to Tim and said “Oh dang, I think I might throw up,” in a slightly fascinated sort of way and then, while he dug around for some sort of bucket-like item to help me, I sat up a little straighter and said “No. No, wait. I think I’m going to pass out. Ah. Hang on.”

And then I fell over, the world disappeared for a solid thirty seconds (so I’m told; it was kind of like hitting the DVD skip button to me) and when I came to, Tim was holding me like an unwieldy sack of potatoes while I said something equivocal to “I’m sorry! Rebooting, I think!”

And then he asked me if I wanted to go home because hey, I’d kind of just lost consciousness, and I said – because I’m a moron both at heart and in the brain – that hell no, I want my vacation. So he acquiesced and we went to Kupocon all the same.

The ferry ride felt like five minutes instead of an hour and a half because I pretty much fell asleep for all of it. After that, no further ill effects. I still don’t know what in the world that was.

I’ve kind of been taking it easy since then, though. All of the theories about what caused my brain to spontaneously reboot seem to have to do with stress and a lack of escape from it (I’m very, very bad at relaxing you may have noticed) so I’m attempting to maintain chill.

I did get the Suggest-A-Sketch drawings for Patreon completed. There are surprisingly many of them because I took at least one prompt and just ran with it. I’ll start posting those in the comings days, as well as the new request post, but before I start that I want to mention something I hinted at on my Tumblr just to give a bit of advanced notice in case anyone’s interested in the slightest: Before the end of this next month, I’m thinking that I want to try doing commissions in an attempt to acquire enough funds for a new computer before my only remaining old one shows its age and has a hardware cascade failure of utter doom instead of just the hiccups it currently displays on a semi-regular basis. My tentative plans are to offer commission slots to you fine folks first and at a bit of a discount, and then to the wider world at my regular rates (which I need to review and possibly adjust prices on; more on that as it develops).

I also want to offer a Patreon-exclusive sort of commission: custom tikedi and/or tekk, with an added option of having your newly designed character make a brief appearance in the comic if you’d like.

I probably won’t do those different commission types all at once but rather in phases, and each time I open up a phase of commissions, there’ll probably be only three slots because I’m rather new to this. But I wanted to say something ahead of time for those who might be interested.

Now, have a bonus selfie of Tim as genderbent!Lightning (Final Fantasy XIII) and myself as Aerith (Final Fantasy VII) from just before the con that I miraculously survived long enough to attend! 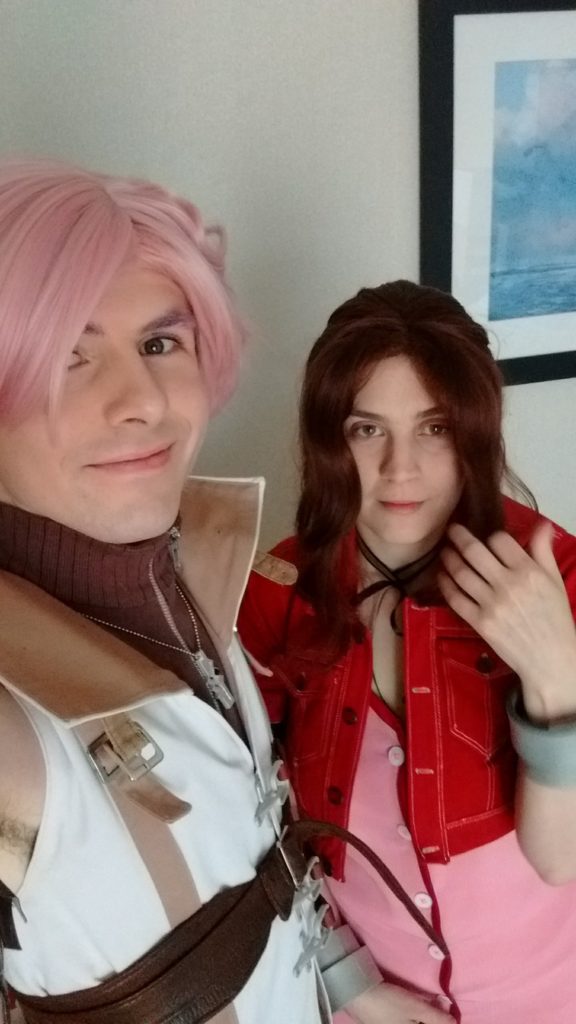 Tim made everything in those costumes because he’s a wizard, and of course, he’s got a lot more to show off on his own Patreon (obligatory advertisement here because, after all, he buys half the groceries). I’ll try to be healthier in coming times, I swear. No more near death experiences! Next time you hear from me, which will probably be tomorrow if you’re pledging and a few days later if you’re watching: there will be sketches.