First off, I have some goodies for you again from the Fanworks page! Yet another batch of fanart from Alexander Shakalov, who is becoming a staple of these news posts, first of all. I got some darker work this time and man, I wish I was as brave in my stories as this particular fan is in fanart. 😉

And there’s a new piece by Pezwolf from DeviantArt, who’s been a great guy to talk to there and on Tumblr over the last few months. 🙂 He has a few more, but I’m saving those for a special occasion. You’ll see! 😀 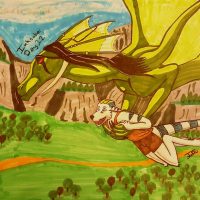 Why Can’t We Be Friends by [email protected]

Second, a little bit of news and a little bit of talk about how I’ve been doing. I just celebrated a small personal victory today. After some tough times trying to keep up, I finally have the beginnings of a buffer of comic pages, so I can relax and fit a bit more into my days now. 🙂 I’ve also got some help in the future, and that saves me a lot.

I often find there’s a bit of mystery behind the creation of webcomics. They take a long time and a lot of effort to put together, if my experience is in any way universal. The story (if it’s like mine) needs to be planned in advance and mapped out so that there’s good pacing page by page and chapter by chapter, it all has to be drawn, inked, painted, scanned and formatted somewhere in there, there’s text and effects to put on to finish it off, and then there’s getting each page set up to post on (sometimes) several sources. I post mine here, on Patreon, on DeviantArt, Tumblr, and Tapastic to get as much exposure as I can. Some of those sources update earlier or later than others with Patreon always being first and the main site always being second. There’s reasoning for all of it, all depending on how the different audiences respond and and when and what will drive traffic where. There’s also advertising. I need to make sure I make regular noise about postings both here and on Patreon, and I have to make that noise on several different social media channels (hooray for Hootsuite) because not everyone likes Twitter, or not everyone likes Facebook, and again, it’s all about broadcasting widely. Each one of those social media networks has a different format for their content, so it all takes a while to put together. Ultimately having a webcomic is a little like having a full time job on top of my real full time job. And I still need to make dinner, keep the home clean, make sure my cat is fed, make sure the bills are being paid on time, and all the other bits of minutiae that we all have to deal with. Somewhere in there I also need sleep. Y’know.

And that is why I really, really, really need to always have a few weeks’ worth of comics and Patreon content finished ahead of time (the aforementioned buffer). It’s just necessary so that if I get sick or if I get sick and tired I can just take a day to chill and it doesn’t hurt the progression of the story. Because I moved twice in the last couple of months and I’ve been very recently doing so much work to put my life back in the order it was a little over a year ago, I didn’t have much time to build that buffer. I’ve been working deadline to deadline since November. It’s tiring. It takes the fun out of things. It’s not a good way to go about this business. Having even just the one week ahead that I do now is a huge relief. I can stop for a few minutes here and there and recharge.

And it’s at this point that I want to say a great big thanks to my boyfriend, Tim! He’s been watching me slam my head into the wall for a few weeks now, the poor guy, and trying to figure out how he can ease my burden. No one’s ever been able to before, but he finally came up with an idea that’s going to save me a lot of time and headache. He’s busy himself, being the kickass cosplayer that he is, but he does love playing in Photoshop, so when he does have time he’s offered to help me with the most boring part of the job: formatting the comic. That’s scanning my finished artwork, piecing it all together when the pages are too big for the scanner’s glass (the Jahrd pages always have that problem), and then putting panels together, cleaning up the lines, color correcting, resizing it for different platforms, etc. Oh my god. Oh my god does that ever take a load off of my back. He even offered to build the speech balloons for me, but I don’t think I’ll ever be able to have a solid enough script ready for him to work off of for that bit. 😛 I do everything in sketches and point form notes. Alas. But man does his effort ever help.

What does this mean for you guys? I know there’s often been a problem with me not responding very quickly to emails and the like. There are people out there who want to have extended conversations with me and that especially causes me guilt because I just haven’t physically had the time to keep up with it all. I still don’t think I’ll be able to manage anything extremely large in the near future – I need a several week long buffer built for that and that’ll take me several more weeks to complete – but in about one week’s time I’m hoping to be back on track enough to be able to improve my turnaround time on communication, at least. Keep an eye on that.

Things also on the To Do list for the next week: get the Hiatus Tale and filler art compiled and out of the archives. I said I’d do it and I will. Very, very soon. Promise. 🙂

Less soon, but also on my To Do list: redo the archives if I can figure out how. There are a few ways in which they offend me, currently, but I need to do further research to fix the problem. It’s always something.